Do you bleed? I was surprised to discover that Ben Affleck didn’t change his voice at all when he was performing Batman. Instead, this task was left entirely through audio technology and computers straight from his cowl. It has been nearly 3 years since the beginning of a new Superman movie franchise. Warner Brothers finally realized that reincarnating the Christopher Reeve films is a dead issue and it was time to move on; and that it did, with actor Henry Cavill as Superman. I was thrilled when Warner Brothers gave me the invite to the NYC premiere of Batman v Superman: Dawn of Justice at Radio City Music Hall (which is one of the biggest theaters I have ever been graced to sit in). With anticipation and excitement, I headed to NYC with my cameras to also cover the black carpet, interviewing the cast and crew. Batman was going to be appearing on screen with Superman for the first time. How could this not thrill anyone? This is an official review of Batman v Superman: Dawn of Justice, and there will be spoilers. Again, SPOILERS ahead.

So the obvious question is, did I like the movie or not? Without giving the film a score or rating, I will honestly say I liked the film. It is not without problems, but the last 30 minutes of the movie wipes clean anything I felt may have been missing from the first half. If you haven’t seen the film yet, and are edgy knowing about plot points and details before seeing the movie, then please, read no further. I will be spilling the details. This movie dares to go in a direction that is so dark you slip into darkness with it. With that in stride, I will say that what we do see in the movie is everything that is good but with a desire to see more. The development just feels rushed at many points, but that doesn’t stop it from being good. What do I mean by this? Since this is a sequel, or at least a continuation, there are things that we want to see in aftermath, for example, the development of the relationship between Lois and Clark (Superman). Instead of having something we can stick our teeth into, what we get is a cute, quick scene of Clark and Lois in the bathroom where Clark jumps into the tub with her. Rub-a-dub. Of course, this a good scene, but the good feeling soon wears off when everything turns for the worse.

What we get is a comic book pacing, literally. The opening of the movie has us pinned to the screen as we see a visual retelling of how Bruce Wayne became Batman. You know the story: young Bruce and his parents exit the Theater and in the alley … well, you know. After his parents are killed, we are shown the psychological effect of the young Bruce but in slow-motion edited in with graphics and titles. A music video of sorts which I thought was a unique way of getting through a load of storytelling that we have seen over and over again. And I was glad not to have to sit through another rehash of Bruce’s childhood. The point is, if you are coming into this movie thinking it’s going to be a complete sequel to Man of Steel then rethink that notion – this movie is from Bruce’s point of view, at least most of it. In fact, we’re taken back to the ending of MOS but through the eyes of Bruce Wayne, and with this in mind, we are able to experience another point of view from Man of Steel that we didn’t see before. Bruce is angry. Metropolis is suffering, and he is powerless against this new threat called Superman. Until he gets angry.

In all fairness, the attention taken off of Superman during the first 40 minutes or so is for a purpose and it is brewing up a good fight between Superman and Batman. What has been done effectively was the emotion and genuine dislike that Batman and Superman have for one another. You believe it. Batman wants to kill Superman, and Superman doesn’t like Batman (and isn’t playing Mr. Nice Guy with Batman either) even if he doesn’t want to kill him. But what is even better is when the two are forced to pair up with one another against a bigger threat. This is the turning point in the relationship, when they both finally realize they are better off as a team rather than enemies. With bigger fish to fry the schoolboy yard fights must go, so they quickly settle their differences to fight a greater evil, Doomsday.

At first when I heard that Doomsday was going to be in the movie, I yawned. Not again. How many times has this been talked about before? But this plot connects the two films together perfectly; and, in a very creepy way. We discover that General Zod’s corpse is the genetic stew behind Superman’s new enemy. This leads to only one disappoint in a new character introduced, Lex Luthor. Jesse Eisenberg and all his talents could have been used more effectively rather than just some other wacko from Arkham Asylum. And basically, that’s all Lex is…a derivative character of the Joker or Scarecrow. His character fits in smoothly for a villain of the Batman universe, but as the only person in the world who uses his brain and wits to outsmart Superman, Lex is just a victim of his own psychosis. He is left rambling behind bars, and we get the sense that he may never come back to it. And if he does, why do we need the Joker?  We got Lex Luthor.

Now, we all know the competitive marketing going on between Marvel Entertainment and Warner Brothers. And so much can be said about this, but you can thank Marvel if they were an influence behind the introduction of the Justice League movie in the works. Yes, please give Marvel Entertainment a big thank you. Zack Snyder introduces the Justice League well, and with awesome power and glory, as they should be, the true Gods of Comicdom. We don’t really get to see Wonder Woman in action until after the Batman / Superman fight, and when we do, Wonder Woman is the surprise sensation of the movie! The true God unleashed…she means business. And I’m prone to say that she could have taken down Doomsday on her own if Superman hadn’t interfered to help  her, which led him to his own death.

So, to ease anyone’s worries, if you’re thinking you don’t want to see DC do Marvel on the big screen, don’t let that concern you. It was a delightful surprise to anticipate such a union. And when Snyder finally introduces the JL you get this giddy feeling of Wonder Twins, Activate! The action is the best you’ll see this year. But the weakest aspect of this new franchise continues to be the music. Hans Zimmer actually did more with the soundtrack of Man of Steel than with Batman v Superman. Zimmer perhaps just did a simple variation of the MOS soundtrack. There were a couple new tracks but nothing really to make you feel like this is a soundtrack to a new movie. I will say that Wonder Woman’s drum roll was well done.

The Visual FX work is fantastic! The FX is clean and smooth, and this film should win an Academy Award for best FX in 2016. The flying FX actually improved. In all realness, our heroes at times don’t look real but are real, and that is the best part of the movie. They are shaped in all their glory as comic book heroes; big and bulked out, like they were drawn that way on screen. Henry was pumped and reflected the modern bulkiness of today’s Superman. Henry was in far better shape in BvS than in MOS. Ben Affleck did a fine job in the role; he took it seriously, and he handled the silver battle suit well. We get a good taste of Batman’s alternate wardrobe.

It was a well done movie, and a well done Batman movie. Superman fans might be disappointed that there wasn’t enough Superman in the beginning of the film, but I have the sneaking suspicion that this movie is what it is…a Batman introduction with Justice League attached and we won’t get the true sequel and have the gaps filled until the next solo Superman movie is released (whenever that may be). Aside from that, Lois Lane is the snooping reporter who is always on the verge of death. Superman comes to the rescue three times to save her. The elements are all there, and it’s a bigger story not finished yet. Be patient.

Batman v Superman uniquely rekindles the fire burning from the first film, and pushes you into this new problem of Batman and then, into another problem, the death of Superman. This is all leading up to the Reign of the Supermen long-winded story from the 90’s and all the great characters that spurned from that saga.  It’s a triangle in storytelling that we had no idea was happening behind the scenes during MOS. In this light, writer Chris Terrio does it well; we sense the anguish Batman is feeling and frustration that Superman is feeling. This is not the Superman from the golden era of Christopher Reeve, where there is always a happy ending. And if you think the Trump rallies are getting annoying, imagine how Superman must feel, being thrust into politics beyond his will.

This film reaps as a faithful interpretation to the modern comics of skepticism against anyone possessing superpowers, and it is also an honorary echo to Frank Miller’s classic graphic novel The Dark Knight Returns. The Death of Superman is one of the greatest comic book stories ever told. This film tackles it well and even pays homage to Funeral for a Friend. This review is apt to change once the 3.5 hour Director’s Cut is released on Blu-ray (which is not supposed to be canon). But still, the movie will not disappoint you. If you are a Batman fan then this is the movie you have been waiting for. If you are a Superman fan, you’ll lavish to see more. Go see it. And then see it again. Thumbs up. 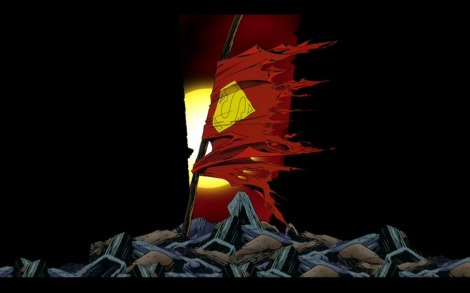