From Birthright, Earth One to Superman: Secret origin, the reboot franchise Man of Steel is a groundbreaking and risk-moving achievement of how great today’s comic book mythology really is. From Krypton to Earth, the action is stunning and never ends. There are tragic and dark moments in question especially with the controversy concerning Zod, but it plays out like a Shakespearian tragedy. You leave with questions but the drama leaves with you too. After seeing this film for the second time, first at a press screening (two weeks before its’ release) in 2D and then again in 3D, I’m so inclined to point out all of the comic book mixtures of the film that I hope I don’t overshadow the cinematic elements! Is this movie dark? Yes it is, but not like the Dark Knight franchise; it’s also very real. Today, large scale devastation in major cities is not unheard of. Escalated thunder storms, floods, hurricanes or earthquakes, it’s not just in the movies. Hans Zimmer’s soundtrack could have been more glorious like Superman: The Movie but it fits the mood of the film. This is an incarnation of Superman that has been long delayed but has been here all this time in comic books, graphic novels and video games. It surely puts DC Entertainment in direct competition with Marvel, and with fear!

Henry Cavill’s performance is genuine and real; he delivers and is a light that shines in the darkness. You will want the world to love Superman and root for him to succeed. Concerning the costume changes…who cares? Cavill is in such great shape he could literally burst through the damn material. The young Cadet who uttered “I think he’s kind of hot” gains some giggles but there is no cat and mouse in this film. You don’t see Lois beating around the bush “Do you eat?” Lois reaches up for the kiss; the chemistry doesn’t stop by the film’s end when Cavill finally hails the Clark Kent glasses. Superman is hot, but he is also tough and will throw your gazillion dollar silo to the ground with a violent crash if you dare look for where he hangs his cape. He can be gentle, but within reason. Clark – thank goodness it is not the New 52 Clark. I’m not a fan of the penniless, disheveled and confused persona of the New 52. Come on, its Peter Parker ripped-off for the DC Universe! No, Cavill’s Clark Kent isn’t a geek. Not with those tight jeans, dressy shirt and tie, there is a clever balance. We never see Clark turn into Superman so the sequel will have to deal with that. Shirt-rip please! Childish, I know. 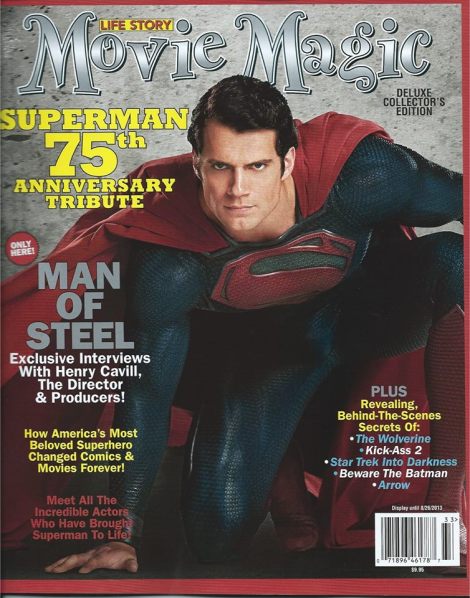 The film is indeed dark, and it gets darker and darker as the plot unfolds. We see Metropolis get wrecked beyond habitation and Superman still emerges as Earth’s hero not the direct cause. Cars and buildings are obliterated and the Daily Planet staff nearly bites the dust. Yes, there’s enough damage here to make the World Trade Center tragedy seem very small. But the light comes back when Superman and Lois kiss – just what we wanted to see. Not too much, not too little – just enough to keep us wondering about the sequel. Possible satin silver sheets in the Fortress of Solitude? Ok, enough, Cadet. As far as the screenwriting goes, Man of Steel doesn’t always play out in real time; and thank goodness. We get flashbacks that help fill in story details. It works quite well; it introduces Clark’s background without taking up the entire first Act. There are also dream sequences mixed in with real scenes that move the tension forward. Superman is immersed into a pit of human skulls; evolution has chosen Krypton but only if Superman dares to stop it like a fish swimming upstream by the power of steel. And there is this excellent Christ motif, the first Superman film to actually layer a Biblical purpose head on. Christ who was the savior, taken away in handcuffs at the age of 33 – so was Superman, Earth’s savior in handcuffs at age 33. Both could have freed themselves but chose not to.

Evolution appears to be a telling theme of the film, and though I have to wonder how Faora knew anything about Darwin’s Theory of Evolution that’s ok it works here. It’s survival of the fittest. Like Yoda said, the darkside is quicker, more aggressive but not necessarily stronger. Zod attempts to terraform the Earth for a New Krypton. This idea was tapped into on Smallville and the 2009 World of New Krypton. Then there’s Superboy Prime, Zod in rage and able to destroy the world with his heat vision a descendant of Legion of Three Worlds. I love it, don’t you? Video games like Mortal Kombat vs. DC Universe are briefly revisited with the rage, and once you have it you are not yourself. In fact, we see Zod lose it with the rage, heat vision uncontrollable; Superboy Prime gone nuts. Superman has a real mission, he has to save the world and Jor-El gives him a real father to son pep talk, “You can save all of them.”

It’s obvious he doesn’t save them all; the destruction is beyond belief, but he does save the human race. And it’s there – the action, appeal and glamor of any hit summer movie. Man of Steel will surely bring in high box-office numbers. Superman Returns will remain a lost passion for the giddy fanboy. You have to feel for Brandon Routh as he had to fill Christopher Reeve’s shoes and play Superman like Reeve. Here, Cavill has an opportunity to do his own Superman. And he looks like Gary Frank’s drawings. Amy Adams will make you believe Superman still needs Lois Lane. Russell Crowe gives Lois the secret knowledge to send our villains back into the phantom zone. This will probably be the only Superman movie you will ever see Lois interact with Jor-El, even if it is the digital Jor-El. Crowe is magnificent! He never overplays the character, but pulls back to be humble and caring towards all life. I can say that Kal-El has come from a good source. I was delighted that the Phantom Projector was actually in this film. Yes this is classic comic book lore, fantastic!

With today’s digital technology, the realism of flying, outrageous superpowers and city-devastation is simply simple in Man of Steel. You won’t be fooled, you won’t look at Superman fly and think, gee, that was bad. In one scene where he learns to fly, it brings to mind that hit 1980’s TV show The Greatest American Hero. You can be critical of the shaky reality-feel of the camera work by Zack Snyder, but he shot the film completely handheld. Russell Crowe felt there should have been multi-camera setups and he briefly criticized it in an interview. But I liked it. It kept the film simple without being gaudy. Krypton is exotic and a direct descendant of the first pages of John Byrne’s Man of Steel #1 released in 1986 and one year later, adapted into a 4-issue limited series called World of Krypton. Thus, the Krypton scenes are inspired from these books and finally, on-screen for the first time. For those who read Superman comic books, Jor-El’s robot Kelex has been around since the late 1980’s. If you were disappointed by the previous Superman Returns, or indulged into Smallville for ten years because you are a fan, let it be known that the comic books within the past 20 years have greatly influenced Man of Steel.

The Donner-verse is officially a thing of the past in Zack Snyder’s film. There may only be a touch here and there that might remind you of the previous epic Superman: The Movie, but Nolan, Zack Snyder and David S. Goyer throw the Donner-verse completely out. Where Superman Returns and Smallville often treat itself like a tribute or tone-poem piece, Man of Steel opts to embrace modern comic book lore and without fear, an updated version of Superman that encapsulates a blend of stories already beloved and remembered by young comic book readers of today but untold in cinema, and like a kick-off on the big screen! A nod to Geoff Johns, if you read the first few pages of Superman: Secret Origin you will find a scene uplifted and placed into Man of Steel. The part where Kevin Costner is showing young Clark his spaceship in the barn and Clark says he just wants to be his son. Costner responds, “You are my son!” An inspiration from the comic book placed directly into the movie itself.

Michael Shannon is gloriously bold as Zod! I took a liking to Zod for his passion and loyalty to the culture of Krypton. You almost feel sorry for him. Perhaps Zod is Krypton’s unsung hero. His vision of greatness is a loss to a lesser but humble society of human beings served by Kal-El’s grace, Krypton’s only natural born son since thousands of generations. Shannon gives Zod depth and complexity. His Zod is not arrogant by any means. You won’t see the “bow, heal or kneel” kind of Zod here. No, this Zod is deeper and expresses his needs, wants and fears and in the end, his break-down unleashes Shannon’s acting chops. Zod’s purpose for existing is destroyed. As twisted as his scheme was, you feel sorry for who he was forced to be (Zod the keeper). Kudos to Michael Shannon, well done on every level as an actor; I am now his true fan.

Again, we all know that Superman wins. He always wins or he wouldn’t be a superhero. It’s not like The Empire Strikes Back where we see Cavill in carbonite. No spoiler alert necessary here. However, as controversy has it and this is abuzz all over the net…how could Superman have done what he did to Zod and still be a superhero? What the movie is saying is that a superhero isn’t perfect. A God he may be, but perfect he is not. Unthinkable in comic book superhero ethics 35 years ago, but not today as the moral reasoning is that Superman can do what has to be done for the greater good. He made a choice. The truth is, Superman doesn’t usually kill and he cannot. Superman has killed by accident, as often as comic book tales present it as. Smallville kept it clean for the most part, priding Clark Kent as someone who didn’t kill. Still, if you watch Nolan’s Batman movies not even Batman will kill a human being to win the war. My personal feeling is that if Superman were going to kill somebody then the way he did so was done with reason, compassion and good judgment. BUT he cannot do it again. If he does, it will kill off the purpose and the impact of why he had to take such drastic measures.

Aside from my comparison to comic book trivia, Man of Steel has an outstanding cast that delivers. Sure they could have expanded on some of the minor roles like Martha Kent, Perry White or Steve Lombard but we understand them from afar. Jenny is a mystery, but my on-camera interview with Rebecca Buller at the black carpet event in New York may confirm that she is indeed an Olsen. It is not Hollywood reinterpreting Superman but Hollywood taking a chance on what is already an available source in today’s comic books. Warner Brother’s has dropped the bomb. Man of Steel is a superior reinterpretation of Superman for this generation! The visuals are dynamic and flawless, and the emotion is there too. Man of Steel is getting DC back into the game and they are going to beat Marvel.